Yeah I know I was supposed to be on this Joint but I had some business to take care of… Without further ado here’s the 2013 Loyola Rap Cypher:

I’ve been doing something I said I would never do. I’ve been lying to my daughter about Santa Claus, the Easter bunny, and the tooth fairy. You know what else? I don’t feel bad about it. Firstly, (not sure if firstly is a word, but don’t judge me) I’m not really lying by commission,  I’m lying by omission. I’m not telling her that there is a Santa Claus or Easter Bunny, I’m just not refuting the fact either. Mainly because I don’t want to crush her little dreams and happiness. Just because I had a bitter, mostly Christmas-less child- hood does not mean that she should also. When Christmas rolls around I always tell her as I let her open a gift “look what daddy got you”, or “look what mommy bought.” Sort of subliminally letting her know that Santa didn’t have jack to do with her presents.

Secondly, I am losing the war of parenting and marriage (like most men.) because as many times as I purposely try to omit the existence of a Santa Claus her mother is saying “Santa is coming” or “what is Santa going to bring you?” I can’t just step in and say, “Santa is going to bring you shit!” Because then I am the bad guy, and no parent wants to be the bad guy. So I’m stuck between a rock and a fictional hard place.

Third (is there a thirdly? and if there isn’t, then I guess I can’t use Secondly), so …Thirdly I am one of those awful Christians who does not go to Church often. I’ve been stuck between churches ever since I moved down to New Orleans. I either do not like a church, most of the ones I’ve been to, or I like it but it is too far to be practical. I digress, I still like to harp on the idea that Christmas should be about God/ Jesus (nevermind the whole not being born in the winter argument, lets save that for a later date) and so should Easter. In some ways I feel like the Bunny takes away from the sanctity of the holiday. On the other hand, there are atheists out there who would analogize my believe in God to my daughter’s belief in Santa/ Easter Bunny. To those guys I say: “Fuck You Buddy!!” I already said I wasn’t a very good Christian.

Fourthly (that sounds plain stupid) my daughter watches entirely too much television. This is MY FAULT. The television is a big promoter of the Santa Claus/ Easter Bunny agenda. It is why my daughter’s attention span sucks. (It is also part of the reason why she began speaking and counting at an early age.) It is hard to tell a Toddler no this isn’t real when every t.v. show she watches has a holiday episode that NEVER speaks about religion but features a heavy dose of SC/EB. (I can abbreviate Santa Claus and Easter Bunny without introducing them, I’m good like that.) You can’t say “Merry Christmas” anymore, it seems. Even “happy Holidays” seems to be headed for a downfall. pretty soon we will be limited to either “Happy Gift Giving Day” or “Happy see members of your Spouse’s family which you hate day”. When my daughter gets older she can be whatever religion/ non religion she wants but while she lives in my house she will be a Judeo/Christian/ respecter of Muslims.

Mostly, I want to raise a nice respectable young lady, who does not end up as a stripper. If believing in Santa means that you keep your clothes on while talking to strange men, by all means, believe in him until you die. The only thing that irks me more than this whole Holiday lie situation is the inevitable birds and the bees. talk… 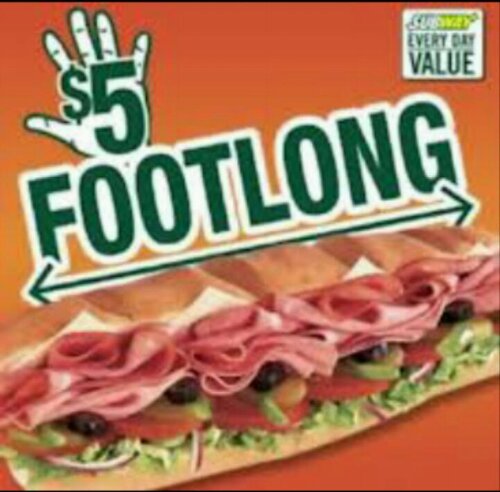 So, recently someone measured a Subway sandwich and found out it doesn’t measure up. The foot longs (12 inches in a foot) are really only eleven. Subway counteracted by claiming the bread wasnt cooked to their specifications. That statement didn’t cut it so they went to the legal jargon saying “footlong” is a product description and not a measurement. Now everyone is “Subwaying” – taking photos of their sandwich next to a ruler, yard stick, measuring tape. 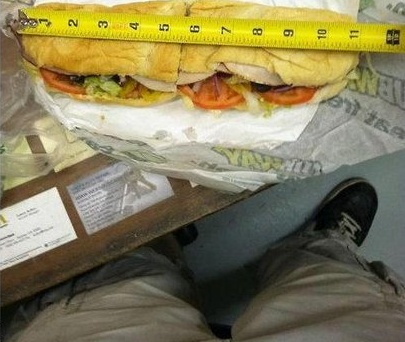 These photos are a Quiznos ad in the making. The biggest part of this in my opinion is the reaction from Subway. We all know when McDonald’s says quarter pound or Angus 1/3rd pound the fine print says precooked patty weight.

For Subway to come out at first and try to say that that particular sandwich wasn’t up to standard was a low blow and they had to know other people would measure up. On the other hand, if they give you an extra inch of bread, their meat already comes in predetermined selections ( 4 meatballs for a “footlong” 2 for a 6 inch.) Is it really that big a deal? @Royal_U_G 1royalradio.com

Nothing You Can Do About It

Now personally i find the situation amusing. I mean I do enjoy a good battle .  But these dudes were just rocking together not too long ago:

as much as I enjoy the punchlines that come from diss tracks There’s something I enjoy more: Young blacks getting money. Working together will accomplish more than tearing each other down. Its all cheap entertainment for a while but what happens when that gets old? There’s more of an upside of working together and building the best product you can put out.

But everything fades
At different rates
So what used to match
No longer goes together
Both of these were blacks
No longer shown together
Maybe its a difference in the stitching
They werent sewn together
Just gave the appearance
Whenever thrown together
Together but seperate,
Alone as ever

Everything fades
Until its a fad and its hot again
Just to be worn out
With that favorite top again
Just to be worn out
Expectations toppling
A toddler’s grin
A dynasty a rivalry
A bottle spin
Stars supernova, a cosmic end
Roses wilt, like a brilliant mind
Into unconsciousness
War leads to anarchy
Leads to unbridled sin
No Bibles then
No vows no morals
Just idle hands
But even idleness
Fades 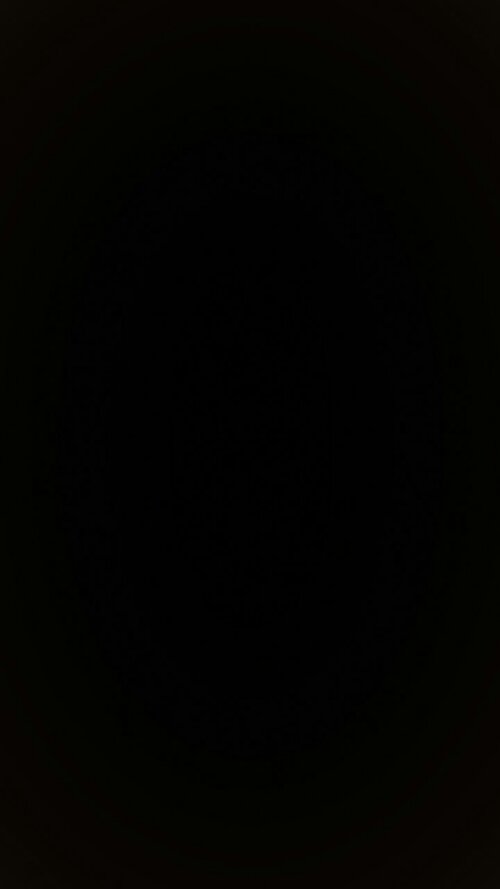 Most Americans have a hobby which borders on art. Whether it’s singing,dancing, writing and performing poetry or even burping. Some people actually try to make a living from these hobbies; and run into a huge problem. What price do you put on your art? If you write songs iTunes would have you believe your work is only worth 99¢ ($1.29 if you’re Justin Beiber.)  If you are a painter maybe you think your work is priceless like Michelangelo but comes out looking more like this. 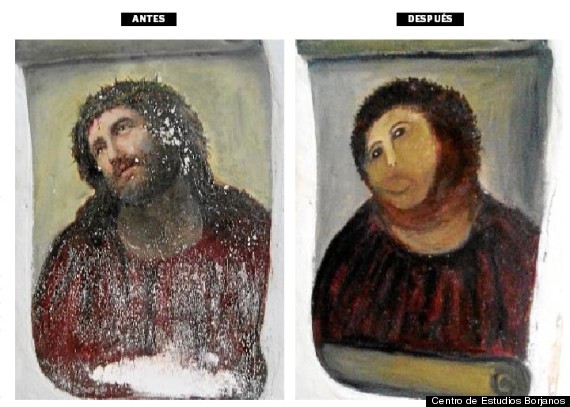 whatever the case it may be hard for you to ascribe a price to something you have worked so hard to accomplish. I have always been a fan of art setting it’s own price. By finding out how much others are willing to pay for certain items you set reasonable third party expectations. Also you avoid the awkward moment of realizing that your art is not what you thought it was worth by someone refusing to pay such a price.

This Chik Fil A thing has gotten ridiculous. If you are gay you will never make those of us straight people that don’t believe that you were born gay, believe it. Much like no straight person could make you believe that you weren’t born gay. The bigger issue here is what ends up happening to heterosexual and Christian institutions. If you boycott a company that doesn’t believe what you believe then you are basically saying you don’t want them to earn any money. So then what if you succeed and the company goes out of business? Then when these people with different beliefs than you go somewhere else to be hired do you also boycott them getting a new job? So then it becomes an issue because if this continues you are saying that people with different beliefs than you do not deserve to earn a living and support their family. But wait, isn’t that what homophobic people did to gays in the first place? Wasn’t the whole purpose of your “new civil rights movement” to stop discrimination and give people who believed and lived differently equal rights? If you don’t believe in Christianity, then why do you want a religious institution like marriage? Why then is it not enough to have a ceremony by a Justice of the Peace outside of a church and call it whatever new term you want to make up that’s as fabulous as a union of this sort implies? ( that was a joke, live with it) The fact of the matter is that I don’t believe what you believe, I will not apologize for what I believe nor would I expect you to either. But when my beliefs bleed over into my ability to feed my family and I am opressed because of these beliefs I will not stand for it.

Btw, what’s the deal with all the letters? It used to be LGB then LGBT then LGBTQ now it’s LGBTQIA ? How many sexual preferences can there really be in the world and do they all have to add a letter each year? Next year it will be LGBTQIA EIEIO that’s just plan confusing and does nothing to aid the cause.

PPS. Personally I support gay rights, if you have been able to put up with one person in a house for several years and you get cancer you deserve the same rights as a housewife in the same situation. There is NO good reason why people in a union of this sort should not be accorded equal rights. My only quarrel is that if you want a union not governed by religious precedents rituals and beliefs dont call it a marriage. #boom

Sometimes when you’re winning there’s pressure to keep winning. But look at the margin of error. In the NBA and NFL there’s a 3% chance of winning the championship. (although the odds go up if you have a Lebron James or Tom Brady) But whenever you consider what it takes to “win” remember no one ever wins without a team. Even in one man sports such as a track and field (Husain Bolt) and swimming (Michael Phelps) the behind the scenes people make it possible for an individual to win. So with that being said I predict that the NY Giants will go the way 2011 Dallas Mavericks did. Having a stripped down team that does “well” but does not make a repeat performance.